Every year during the last decade, over 100,000,000 Americans have watched the Super Bowl on TV.

You and your fellow fans have been rooting, hoping, wishing, and praying that one day you might get to experience the Super Bowl in person.

Most fans will enjoy the game at home with friends and family. In fact, more than 100 million people will experience the big game on TV this weekend.

But for over 80,000 fans–the experience will happen at Hard Rock Stadium in Miami at Super Bowl LIV.

As of the last few days, the cheapest seat in Hard Rock Stadium was over $4,100. But what kind of experience should fans expect at the game?

Outside the stadium, construction of a $3 million gondola was just completed by Doppelmay, an Australian firm that produces gondolas for ski resorts worldwide. The ride, which lasts 10 minutes, extends to 1,800 feet which will give riders an amazing view of the stadium and the Miami skyline. 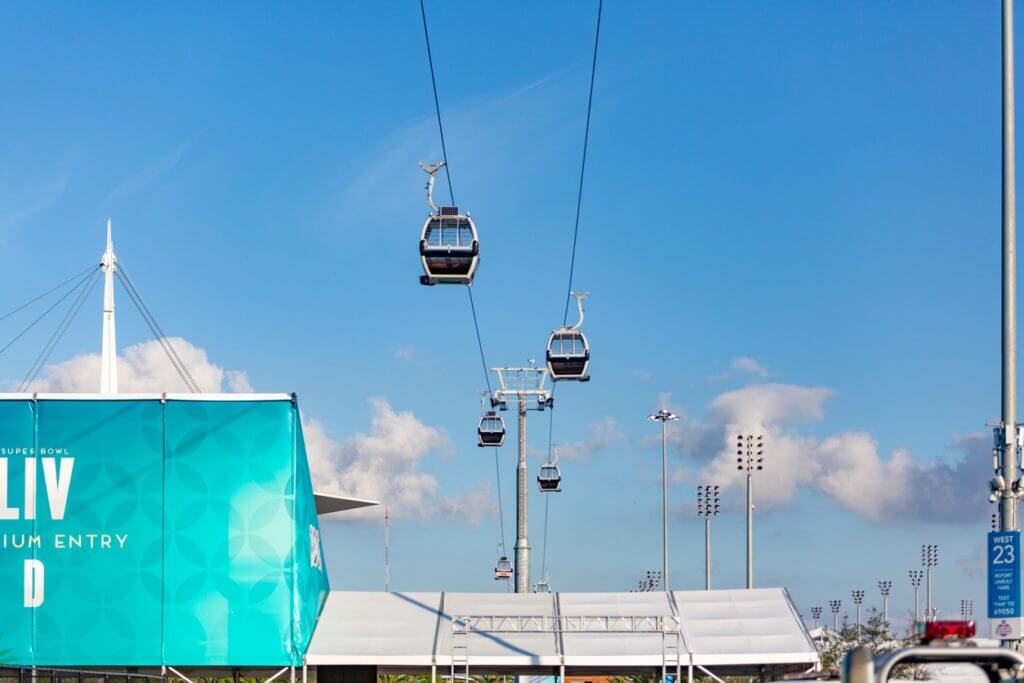 As fans approach Hard Rock Stadium, they’re going to experience the ultimate American sporting event in a way that fans never have before.

Outside of the stadium, it is hard to miss the 36’ tall by 56’ wide Hard Rock Stadium signs that hang high on the exterior of the facility. As with stadium signage this size, it took an 800-ton crane on the outside to fly the smaller (32’ tall x 52’ wide) interior pair of guitars in place inside so the turf was not damaged. 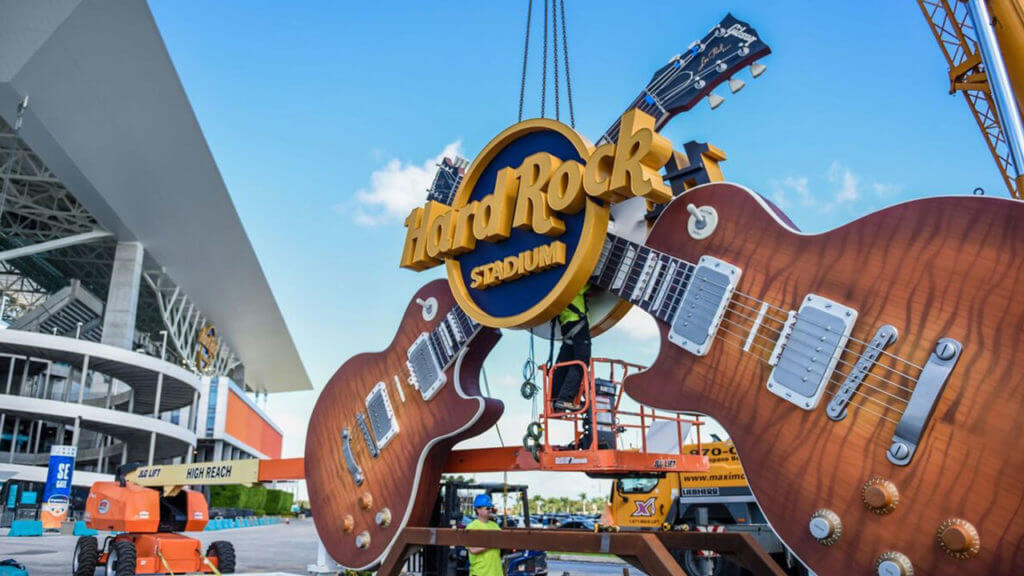 But fans of the Gibson guitar signage will see many smaller versions of the Hard Rock signs throughout the stadium.

As fans walk towards football glory, the first thing they–or anyone else–notice about the stadium is the lights. The Ephesus Sports Lighting from Eaton is the last word in LED stadium lights. They are brighter, but with less glare.

They offer a richer, warmer light, but at 75% in energy savings. They can be programmed to flash and dim in riotous celebrations, but they’ll also last years longer than traditional technologies. As you look at those lights, you know they’ll be playing football under them here for a long time to come.

“I think the most unique thing we have going this year is that this is the 4th Super Bowl being played under Ephesus sports lighting since we lit the first-ever super bowl with LED at University of Phoenix stadium in 2015.” 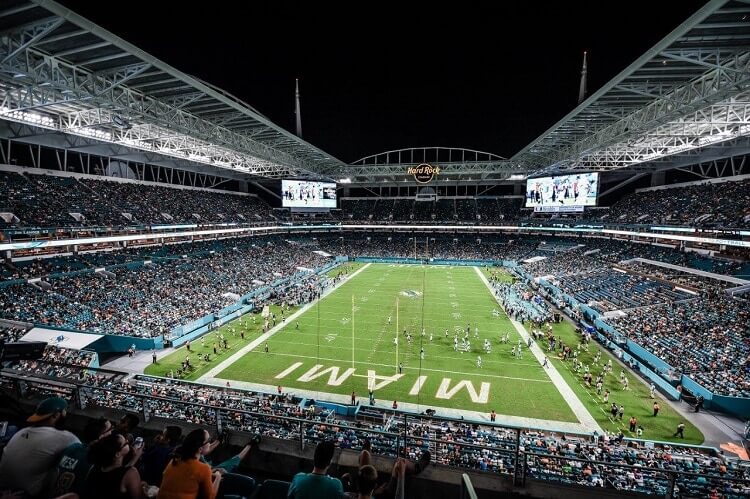 “Venues continue to choose Ephesus for technology leadership and unlimited fan experience. We are looking forward to another great event on the world’s largest stage lit by Ephesus,” said Quijano.

The $350 million Hard Rock Stadium renovation was completed in September 2016. The modernization transformed the fan experience and created a premier destination for the world’s top events.

Reinforcing Miami’s culture and heritage are murals by local artists.

Once inside, fans will be able to easily find their seats thanks to all the wayfinding signage set up around the stadium. Throughout the stadium, LED TV screens to show fans which direction to turn, where escalators can be found, and more. 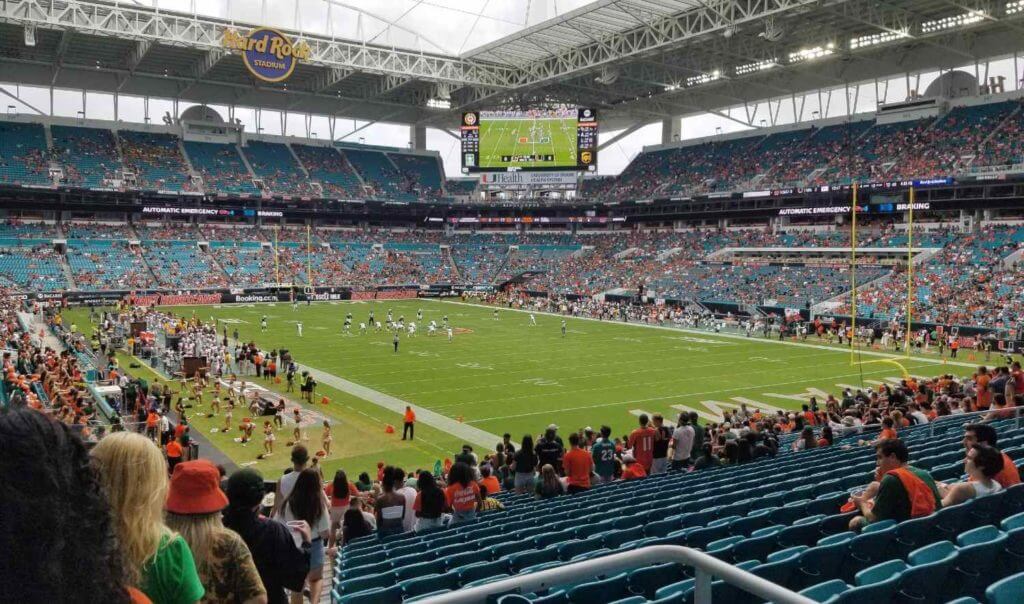 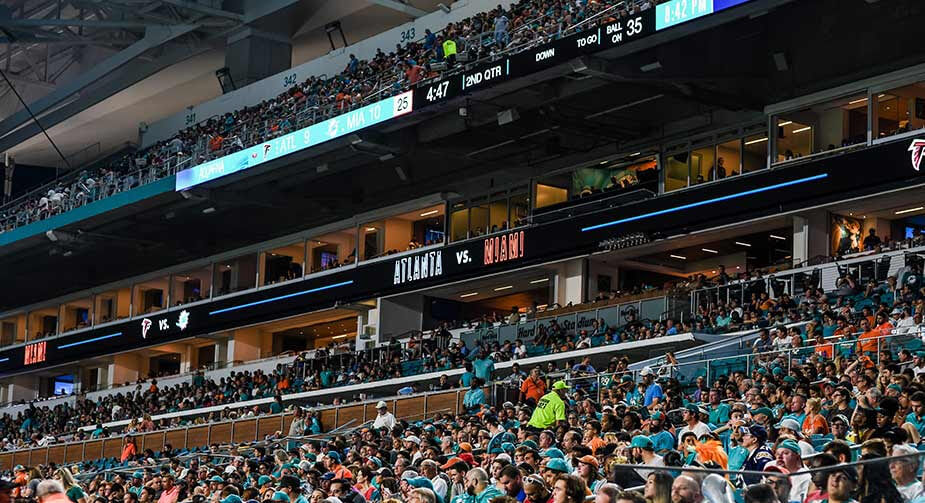 As fans step through the opening to the seats, there it is…the field. Fresh new sod, perfectly striped, and vibrantly green, with a pair of new Super Bowl logos on the 25-yard lines. Unlike many modern professional and major-college venues, Hard Rock Stadium maintains a field of California-grown grass; specifically, hybrid Bermuda over-seeded with ryegrass. 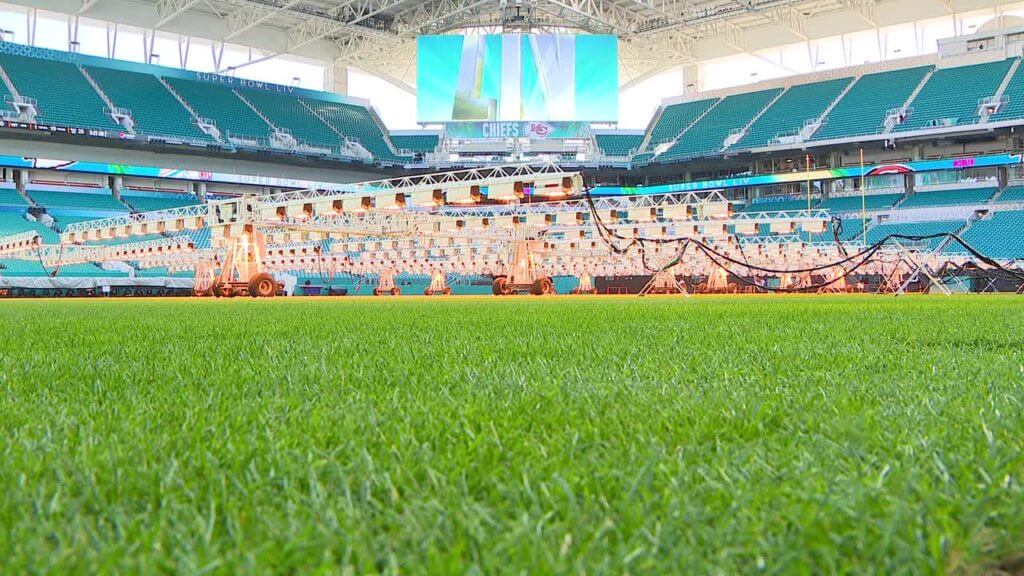 And while fans stare in wonder at the green expanse, a whole technology ecosystem is working to keep that expanse so breathtaking.

Under the turf, wireless sensors are constantly sampling the soil conditions and reporting back to a central control system. A built-in system of drainage pipes over one mile long can move up to 18,000 gallons per minute.

Network capabilities put the entire system under remote control from anywhere in the world. This entire system means that this field can host more games, more quickly, with better grass at all times.

The A/V experience is felt everywhere at Hard Rock Stadium. From the crystal clear singing of the National Anthem to live game announcers over the PA, and crystal clear 112′ wide by 50′ high HD screens in each corner of the stadium.

At Hard Rock Stadium, a new kind of audio network is in play. Rather than relying on a separate (and more vulnerable) network for all the various sources of audio–of which there are plenty in a football game–this stadium integrates its audio channels into the same data backbone that controls other crucial systems.

Miles of fiber optic cable are running throughout the stadium, providing the pathways (and the backups) the network needs.

The private screens in the 72 Club allow select fans to watch replays and highlights on private screens. But no matter the seat, fans will have an amazing experience at Hard Rock Stadium. 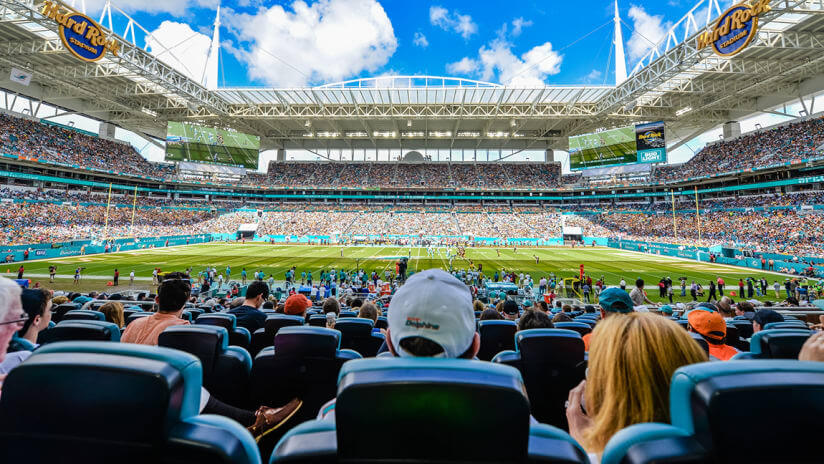 Unfortunately, one of the biggest needs at an event like this is security. For fans, though, the experience has been completely transparent. The security system at Hard Rock Stadium was created by Avigilon & Q4S.

Most patrons see uniformed security officers at the doors, and at occasional checkpoints or sensitive areas.

These officers are just the beginning, though. More than 400 high-definition cameras keep digital eyes on the stadium and its surroundings. Mobile hardware and software work together to show monitors where each security officer is located and what they are doing.

Every single piece of technology that went into building and renovating Hard Rock Stadium was put in place so these fans could enjoy concerts, sports, and the Super Bowl in absolute amazement.

Technology exists to make things better. Technology improves the experience for the fans and the staff at the Super Bowl.

Whether a facility is a small, local coffee shop, or a billion-dollar football stadium, all of the lights, electrical, audio/visual, security, and signage technology exist to enhance the experience of customers and staff.

That desire to make things better is what drives FSG every day. For over 37 years, our experts have been working on facilities to improve their lighting, electrical, signage, and technology solutions.

From installing the lighting at NRG Stadium to hanging signage at AT&T Stadium, U.S. Bank Stadium, and others, to turnkey electrical construction of the tallest skyscrapers in New York, Dallas, and beyond – FSG experts are building and improving experiences every day.

All over the U.S. FSG installs the technologies that 80,000 or more fans will experience this Sunday at the big game.

And it’s not just about FSG’s own capabilities. FSG is partnered with companies like Eaton Cooper, Structure Tone, Daktronics, and many others – to fulfill your projects with industry-best products and services.

If you’re looking for ways to make things better in your business or organization–and you want an experience that your customers and employees won’t forget–give FSG a call today at (512) 615-6615, or contact us here.